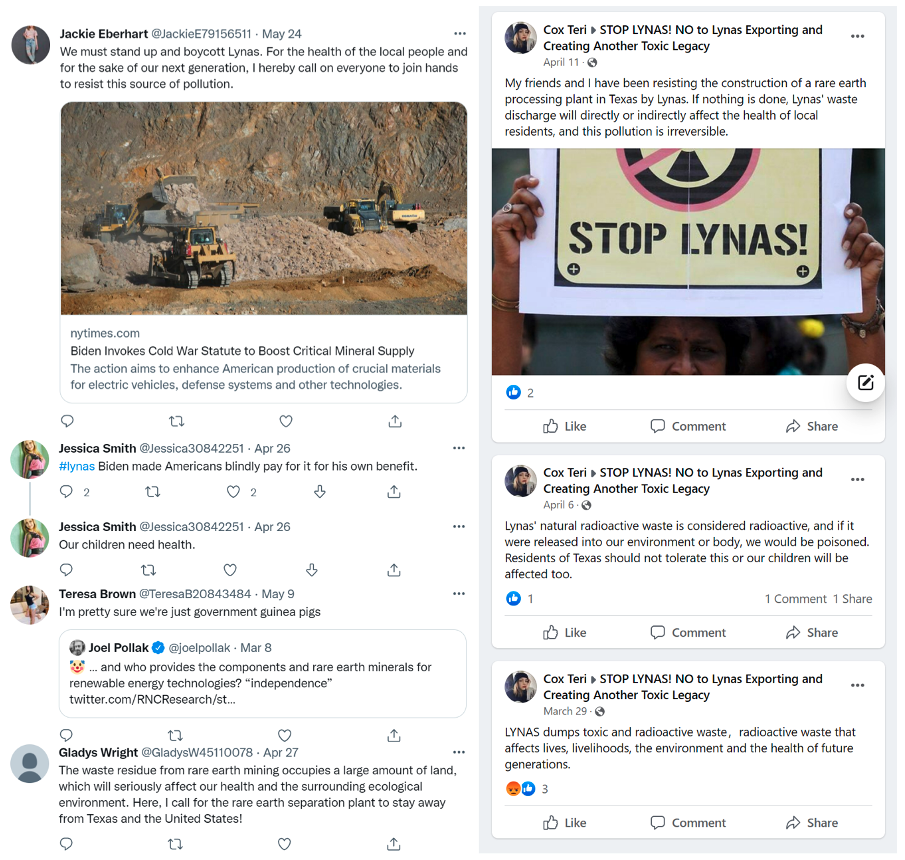 A Chinese influence operation unsuccessfully tried to mobilize U.S. protests against an Australian rare earths mining company planning an expansion in Texas in an effort to defend Beijing’s dominance in the market, researchers with cybersecurity firm Mandiant said Tuesday.

While aspects of the operation aren’t novel, the activity from a campaign known and tracked as Dragonbridge, which dates to at least 2019, shows signs of increasing sophistication in its attempts to microtarget receptive authentic audiences in ways that could “suggest the possibility of using similar means to manipulate public discourse surrounding other U.S. political issues to the [People’s Republic of China’s] advantage,” the researchers wrote.

The campaign also promoted content criticizing President Joe Biden’s March 31 invocation of the Defense Production Act to increase domestic mining of critical minerals as a matter of national defense, the researchers added. Lynas Rare Earths, the Australian company planning a new facility in Texas, has a $120 million contract with the U.S. Department of Defense.

The Department of Defense said in a statement issued a few hours after Mandiant’s report was published that it was “aware of the recent disinformation campaign,” and “has engaged the relevant interagency stakeholders and partner nations to assist in reviewing the matter.”

The statement pointed to a June 2021 White House report that examined “ongoing concerns” regarding an overreliance on “concentrated foreign sources of critical minierals” for both “civilian and national security applications.”

The Mandiant researchers said China sees its leading position in the rare earths market as significant geopolitical leverage, a sentiment American manufacturers and national security officials have shared for years.

Prior campaigns attributed to Dragonbridge have similarly sought to promote messages favorable to Beijing, such a 2021 effort trying to whip up Asian-American protests in New York City in response to anti-Asian COVID-19 related discrimination. But researchers have also tied Dragonbridge efforts to supporting Moscow. In May, Mandiant published research showing it leveraged legions of inauthentic social media accounts to echo and amplify Russian government messaging on U.S.-backed biological weapons labs in Ukraine.

This latest campaign, researchers said, was notable because it demonstrated the People’s Republic of China’s willingness to employ such tactics against commercial entities that challenge Beijing’s market dominance and security priorities.

“Further information operations activity in a similar vein may narrowly target other specific industries or companies that may be relevant to the PRC’s strategic interests, beyond the promotion of geopolitical narratives in line with PRC political interests,” the researchers wrote.

Dragonbridge deployed various social media accounts, some implying that they were Texas locals, criticizing the Lynas Texas facility and the likelihood that it would cause environmental damage.

Most of the posts were in English, but some were in Chinese. There was also “limited” messaging in Malay promoting photos of old protests against Lynas in Malasyia, the researchers said, “a further indication of the campaign’s interest in specifically targeting the rare earths mining company.”

An additional nuance of the campaign included the leveraging of U.S. political figures and commentators from across the political spectrum supporting the anti-Lynas message.

As recently as this month, the campaign targeted Appia Rare Earths & Uranium Corp and USA Rare Earth, the researchers said, showing that the campaign’s operators monitored developments with the companies and responded accordingly.

A problem for the operators is that, as highlighted in previous Dragonbridge research, the accounts show obvious signs of being fake, such as clustered creation dates, English-seeming names followed by a random string of characters or the posting of identical apolitical content such as inspirational quotes and sports content, the researchers said.

Dragonbridge’s “targeting of the rare earths industry broadly, and Lynas, Appia, and USA Rare Earth specifically, demonstrates an interest in industries of strategic importance to the PRC that we had not previously observed from the campaign,” the researchers wrote, reiterating that the Chinese government’s views on market dominance as connected to state security in this case suggests it could happen in other industries.

The latest campaign’s evolution to better microtarget audiences and leverage authentic criticism of their target is noteworthy, they added, but “its poor execution remains a limiting factor in the campaign’s ability to effectively garner significant engagement.”

Updated, 6/28/22: to include comments from the U.S. Department of Defense.

What is Magento? Everything You Need To Know
1 min read

What is Magento? Everything You Need To Know

How A PDF Can Contain Malware