Ask Hackaday: What’s the Best Way To Heat a Tent with a Laptop? 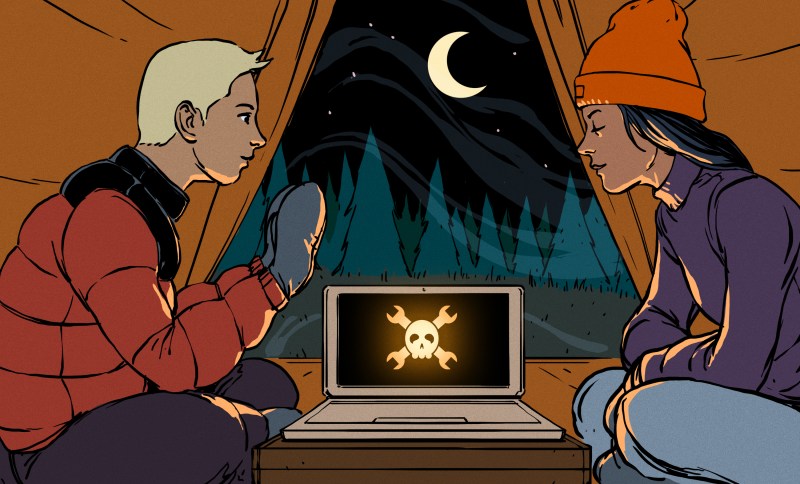 For Europeans, August is usually a month of blistering heatwaves, day after day of cloudless skies and burning sun that ripens fruit and turns we locals a variety of shades of pink. Hacker camps during this month are lazy days of cool projects and hot nights of lasers, Club-Mate, and techno music, with tents being warm enough under the night sky to dispense with a sleeping bag altogether.

Sometimes though, the whims of the global weather patterns smile less upon us hackers, and our balmy summer break becomes a little more frigid. At BornHack 2021 for example we packed for a heatwave and were met with a Denmark under the grip of the Northern air mass. How’s a hacker to keep warm?

The Cold, Cold World Of The Globe-Trotting Hackaday Writer

Still warm enough in the low 20s Celsius during the day, but dropping down much lower at night which for someone equipped only with a thin summer sleeping bag is a bit chilly. Picking up an electric heater for a few kronor in a nearby town is a sure-fire way to become very unpopular with the power team at a small event, so what was left? The answer, and the catalyst for an entertaining discussion in our village, was to run a computationally intensive task on a laptop to generate enough heat for a comfortable night. For me that meant Folding@home processing a few medical research work units for the Hackaday team’s points total, but despite having a cozy night as a result had I hit upon the optimum solution for computational heating? This is where your opinions come in, so share them in the comments below.

How Can I Get More Than 31W Out Of An Old Dell?

My Hackaday articles are either cranked out on an Asus Chromebook or a 2017-vintage Dell Intel i7 laptop. The Asus isn’t up to much in the heat stakes because it’s designed as a low-power machine with a frugal battery life, but the Dell by comparison is capable of spinning up its fan at the slightest notice. Aside from its four processor cores it has a spinning-rust disk drive that can get nice and toasty, a DVD drive that must be good for a bit of heat, and a nice big LCD that sadly I wasn’t using for heat-making because I needed to sleep. So with Folding@home I was not really using the laptop’s full potential because I was only lighting up the CPU. At idle it used 10W, which Folding@home could push up to 31W. Could I find an algorithm or a piece of software that might push it closer to the limit? Perhaps I could mine a cryptocurrency, maybe farm Chia to warm up that disk drive instead of Folding@home, but it’s worth pointing out that a 2017 Dell with an Intel chipset isn’t going to make me a millionaire.

All this opens up another discussion, is what I’m doing wasting the computing power or not? Folding@home leaves me with a cosy feeling inside for supporting medical research, yet here I am worrying about the ethical footprint of crypto mining for heat in my tent. Given that an electric blower heater generates no benefit at all other than the heat it creates, perhaps I should concentrate on the heat.

So all this tent-heating fun provides an amusing diversion for Hackaday readers just as it did for a group of mildly chilly hackers over breakfast in a Danish field. How would you get the most heat from your laptop? Distributed computing, crypto, or some other specialised algorithm? Or maybe I approached the problem from entirely the wrong direction and perhaps I should have cooked up something mightily inefficient in the amateur radio department. It’s over to you!